On December 16, 2014, President Obama signed into law H.R. 451, designating the Brevard Avenue Post Office in Cocoa Beach, Florida, as the “Richard K. Salick Post Office” to honor an individual whose tireless efforts improved the lives of kidney patients.  The legislation was sponsored by Rep. Bill Posey (R, FL) who worked closely with Rich in the fight against kidney disease for many years.

Prior to his passing in July 2012, Rich Salick worked at the National Kidney Foundation of Florida.  No task was too demanding or too insignificant to gain his undivided attention; he would go anywhere and do anything to assist a fellow kidney patient.  As a three time kidney transplant recipient, Rich knew all too well the challenges, disappointments, and triumphs associated with kidney disease.

Prior to his kidney failure diagnosis at age 23, Rich was a national champion surfer who by all appearances was in perfect health.  Following his first transplant from his twin brother, Phil, Rich was told his surfing days were over. But Rich refused to back down and returned to competitive surfing.

Rich’s passion to do everything possible to assist kidney patients is best illustrated by his founding of the annual National Kidney Foundation Pro-Am Surf Festival in Cocoa Beach 30 years ago.  The Surf Festival, which has been renamed in Rich’s honor, has brought increased awareness of kidney disease, and raised millions of dollars for our life-saving services for kidney patients and those at risk.

Rich set an example of how to meet serious health challenges and how to lead a joyous life, no matter the circumstances.  Rich remained dedicated to helping others who suffered from kidney disease.  The designation of the Brevard Avenue Post Office in Cocoa Beach is a fitting tribute to the memory of this man who touched the lives of so many across America. Thank you for your sincere efforts. 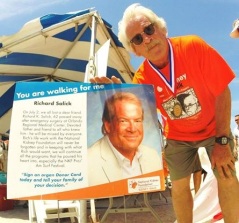