An Astounding Summer of Advocacy!

These are exciting times at the National Kidney Foundation thanks in no small part to the dedicated efforts of grassroots advocates like you. Together, we continue working with federal and state legislators to improve the lives of kidney patients today, and into the future.

Since the Kidney Patient Summit in March, where we stormed Capitol Hill to champion better kidney care policies, NKF staff, local board members, and volunteer advocates have kept up the momentum by:

Advocates also have testified before legislatures around the country on behalf of NKF to help secure the passage of state-level versions of the Living Donor Protection Act as well. This includes testimony from advocates with NKF Serving Minnesota at their state capital earlier this month. Their powerful remarks to lawmakers came on the heels of fantastic news on September 6th that California passed its Living Donor Protection Act with an unpaid leave provision for organ donation.  That makes nine states this year – and we’re not done yet!

We have also had more advocates than ever working with NKF staff to get their state and federal legislators to attend NKF’s events, like Walks and KEEP Healthy kidney screenings. Since May, NKF’s local offices and advocates have included 18 elected officials at events, like Walks and KEEP Healthy screenings, including one KEEP Healthy screening to be hosted by a major southern city’s mayor! We have outstanding requests to lawmakers for several forthcoming events and will continue to work to introduce your elected officials to the kidney community so they can hear your collective voices in person. 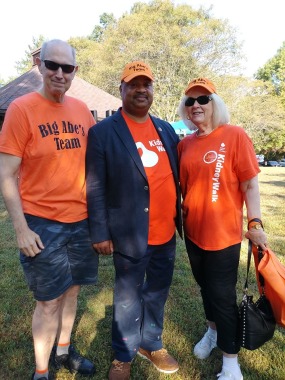 These accomplishments are only made possible with your continued support and engagement.

With so much at stake for the kidney community, we cannot slow down now. We need YOU in the fight with us to finally pass the federal Living Donor Protection Act, rally support for forthcoming legislation to indefinitely extend Medicare coverage of lifesaving immunosuppressant drugs for kidney transplant recipients, and so much more. I hope you will keep asking your friends and colleagues to write Congress and make their feelings known.

Do you want to make an even bigger impact as we seek to finish strong in 2019? Email me at NKFadvocacy@kidney.org to ask about the latest opportunities to get involved. You have a story that only you can tell, and we want to make sure it is heard.