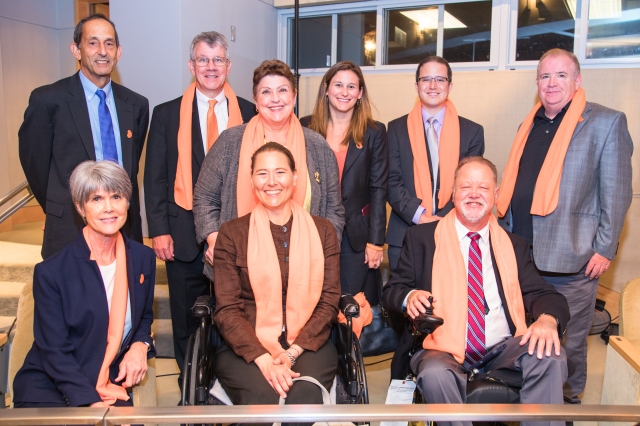 I am thankful I was asked to attend President Trump’s announcement about the new initiatives regarding both pre- and post-transplant kidney care.

This was reportedly the first time in 46 years a U.S. president has taken meaningful action on improving kidney care.  The National Kidney Foundation with its partners, patients and advocates fought for years for these initiatives which President Trump signed as the Executive Order.  I hope this will help make diagnosis, treatment and transplantation easier for those currently living with CKD and ESRD, as well as those yet to be diagnosed.

The order calls for rewarding doctors for early diagnosis of kidney disease, making improvements in organ procurement and decreasing organ discards.  This will make transplantation easier and get patients off the waitlist and dialysis treatment.  It is exciting for patients who may have never thought transplant was an option due to lack of knowledge, lack of organs, or lack of funds.

I know there are many details to work out with the Executive Order and I hope to see it implemented swiftly.

The speech and signing of the President’s Executive Order (EO) marked an incredible day of movement, advancement and awareness for kidney disease advocates.  So many of us have heard advocates, like National Kidney Foundation, speak powerfully about the importance of improving kidney care for years. Now, the same words were coming from the President of the United States and the Secretary of Health and Human Services (HHS), Alex M. Azar.  This was a day of great rejoicing and momentum for the kidney community, due to a multi-faceted and widely encompassing policy signed by President Trump.

From the perspective of a kidney donor, I know there is still more work to be done.  For example, we must continue to champion  federal and state proposals to remove financial burdens for living donors and federal protection for living donors against discriminatory practices by life, disability and long-term care insurance companies.  What also remains unfulfilled is a level of appreciation and job security by living donors’ employers for those offering the selfless gift of life to kidney disease patients.

The fight is not over but, with the EO signed by President Trump, the National Kidney Foundation and its advocates have taken the high ground in the battle against kidney disease.

As a patient and professional, I am so excited about the Administration’s vision for kidney disease. Their major goals – to improve early detection, encourage home dialysis, and increase transplantation – are exactly what kidney disease patients and their families need. I was just 14 when my kidneys failed unexpectedly, and home dialysis allowed me to stay in school, feel better, and have a much more normal life. My brief stint on in-center dialysis required an hour’s drive each way to a pediatric center, where I sat and watched a little baby named Estrella be dialyzed on the machine next to me. It’s no way for a child, or for anyone, to live long-term or while waiting for a transplant.

For too long, efforts to improve kidney care have been held back by a mix of poor incentives and quality metrics for providers across the care continuum. Everyone wants to do the right thing for patients, but that can be difficult to do when the incentives aren’t there – or worse – are in the wrong place.  I am ecstatic that the leadership at the White House, Department of Health and Human Services, Medicare, and the Centers for Medicare and Medicaid Innovation (CMMI) are personally invested in making the changes that will help steer us in the right direction. The heartfelt testimony from families and patients made it clear how badly these changes are needed.

The most encouraging part of the event for me was Secretary Azar’s statement about how this is the result of many people and organizations working together to bring about change. This isn’t a battle; we aren’t here to tear each other down. This is a collaborative effort to improve the lives of millions of Americans that’s been a long time coming. I’m so glad we’re all on the same team, and I can’t wait to see what else we can do together.

1 Response to Great Strides in Kidney Policy Through Patients’ Eyes