On Thursday, March 8th, towns, cities, and the airwaves across the country turned orange in celebration of World Kidney Day. 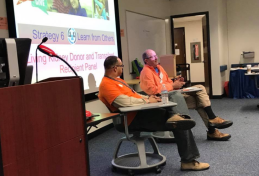 Patients presenting at the NKF Big Ask: Big Give Workshop

During the weekend leading up to World Kidney Day, in Washington, DC, the National Kidney Foundation (NKF) launched the first of many THE BIG ASK: THE BIG GIVE workshops designed to increase kidney transplantation by providing training tools that will help patients and families find a living donor.  The education gained prompted one attendee to announce that she would be tested to potentially donate a kidney to her husband.

Then on March 5th and 6th, nearly 100 advocates and

Advocates on the Capitol steps

family members joined five organizations at the 5th Annual Kidney Patient Summit, hosted by the National Kidney Foundation.  Participants educated Congress about chronic kidney disease (CKD) and asked their legislators to sponsor the Living Donor Protection Act (HR 1270), early detection and treatment legislation (HR 3867), and appropriations funding for CKD research and other programs. Our advocates made a significant impact.  Already, new legislators have become sponsors of our legislation and joined the Congressional Kidney Caucus at their request!

Finally, during the Summit, NKF awarded one of our Kidney Advocacy Committee

advocates the Richard K. Salick Advocacy Award. This prestigious honor is presented an individual who embodies the spirit of NKF’s dear friend and staff member, Rich Salick, a former pro surfer who underwent three kidney transplants, faced cancer, but still put the needs of other kidney patients ahead of his own.  Haley Newkirk from Colorado, a leader among NKF’s Kidney Advocacy Committee, is a tenacious advocate for kidney patients and works to educate lawmakers about kidney disease, legislative priorities, and to help empower fellow kidney patients to make a difference in their lives.

On the floor of the Maryland State Senate, State Senator Thomas M. Middleton rose to

speak to Marylanders about World Kidney Day, CKD, the necessity of raising awareness, and increasing education about CKD.  There to watch were kidney patients and staff from the National Kidney Foundation of Maryland office. 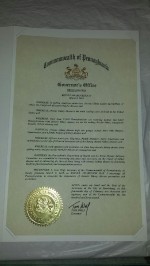 In Pennsylvania, the governor presented a proclamation to our Philadelphia office for World Kidney Day and the office held a health fair at the state capitol building.

In numerous cities, news stations made their mark on the consciousness of American 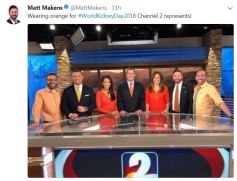 viewers by educating them during news broadcasts. Stations such as Denver, Channel 2 wore orange.  In Pittsburgh, WTAE Channel 4 and New York City’s WABC7 did the same.

In Akron, OH, NKF’s local office partnered with Akron Children’s Hospital to raise awareness about pediatric kidney disease.  Titled “Little Heroes, Big Voices,” this event was aimed at bringing pediatric CKD to the forefront of health care discussions.  In the last two decades, the incidence of CKD in children has steadily increased in all ethnic groups.  With so many Ohioans at-risk, the National Kidney Foundation and Akron Children’s Hospital decided that an awareness day was crucial to changing the statistics in Ohio.  In support of this event, the Deputy Mayor Marco Sommerville attended, and U.S. Senator Rob Portman taped a public service announcement.

As in previous years, dozens of landmarks across the U.S. turned orange for World Kidney Day:  Niagara Falls, the top of New York’s Empire State Building, the Gulf Tower in Pittsburgh, the Peace Bridge in Rochester; plus Tower280, Legacy Tower, Xerox Tower and numerous other buildings.  In Philadelphia, locations such as the Franklin Institute and Ben Franklin Bridge also joined in. In Sioux Falls, not only did the Falls turn orange, but advocates launched 30 lanterns to commemorate the 30 million Americans with CKD.

What did you do on World Kidney Day? Tell us by commenting below.