Congratulations to Dr. Shari Ling and Derek Forfang!  On April 20th, during the National Kidney Foundation’s (NKF) 26th Annual Spring Clinical Meeting, the Foundation bestowed its highest honors to them.

Dr. Ling, the Deputy Chief Medical Officer for the Centers for Medicare and Medicaid Services (CMS) and Medical Officer in the Center for Clinical Standards and Quality (CCSQ), received the first-ever NKF Public Service Award.  This award was established to honor those who have dedicated their careers to public service and who have helped to shape public policies or government programs that improve outcomes for kidney patients. Under Dr. Ling’s leadership, CCSQ has established a culture of meaningful engagement of kidney patients and family in policy solutions that advance the delivery of high quality, person-centered care, across all care settings. The engagement of kidney patients by CCSQ has been touted as a model for how patient engagement should occur more broadly.

ever Celeste Castillo Lee Patient Engagement Award, established in honor of Celeste Castillo Lee, a longtime advocate for patient-centered care and empowerment. It is the highest honor given by NKF to a distinguished kidney patient who exemplifies NKF’s mission and Celeste’s legacy of putting patients at the center of all aspects of healthcare. Mr. Forfang, of San Pablo, California, has been an end-stage renal disease (ESRD) patient since 1999.  He is a kidney transplant recipient and has been on peritoneal dialysis and hemodialysis.  A regional leader of NKF’s Kidney Advocacy Committee and a member of NKF’s Public Policy Committee, he works tirelessly to protect and improve care for the kidney community. Derek is very active with the National Forum of ESRD Networks, which advocates for the organizations that monitor the quality of chronic kidney disease, dialysis and kidney transplant care in the U.S.  He chairs its Kidney Patient Advisory Council, just one of a handful of his leadership roles there. He also serves on the Kidney Health Initiative’s Patient Committee for the Development of a Roadmap for Innovations in Renal Placement Therapy (RPT) Project.

In another first at the Spring Clinical Meeting, NKF also erected its advocacy wall, showing the faces of the kidney patients that the NKF and our advocates represent.  Inspired, dozens of doctors, nurses, social workers, and other practitioners signed up to become advocates. 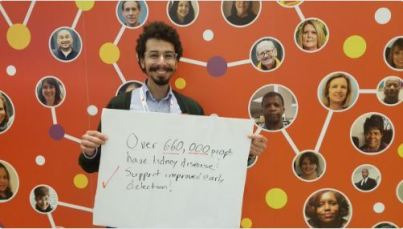 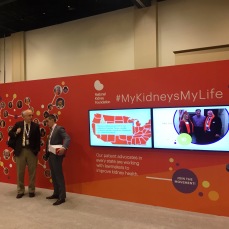