Gaining Support for the Kidney Cause

While Congress was in recess during the month of August, our Kidney Action Committee (KAC) liaisons took advantage of this opportunity to meet directly with their congressional delegations and staffs in their district offices to advocate for the issues important to them. More than 20 meetings were held throughout the country. On the agenda? Emphasizing the importance of federally funded health programs such as Medicare, which provides dialysis coverage for most Americans with kidney failure, and stressing the need for increased funding for kidney disease research through the National Institute of Diabetes and Digestive and Kidney Diseases (NIDDK). 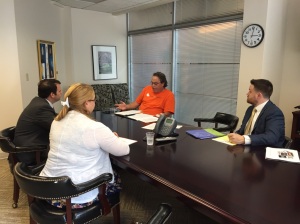 These district office meetings provide a more personal forum to discuss the issues that matter most to constituents. For example, KAC liaison Rachel Payne met with Congressman Steven Palazzo (MS-4), where they exchanged stories about their service in the Marine Corps and discussed what it is like to be a disabled veteran.  Rep. Palazzo seemed receptive to H.R. 1130 and Rachel plans to follow-up with him to ensure his support. In the meetings, Members of Congress and their staffs asked questions about kidney disease and many promised to show their support in the months ahead.

While putting a patient face and story on an issue remains a priority during these congressional meetings, many local NKF staff members attended alongside KAC advocates to highlight NKF’s presence in the community and the prevalence of kidney disease in their districts. 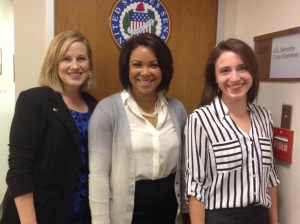 6 Responses to Gaining Support for the Kidney Cause