Congress, Kidney Disease and the Conversation that Needs to Happen

Dr. Vassalotti’s comments come at a time when lawmakers on the Hill and policymakers at Centers for Medicare & Medicaid Services (CMS) are focused on treatment and payment for end-stage kidney disease care in the United States.

However, what is missing from these conversations are strategies to prevent kidney failure and the countless deaths caused by kidney disease in the first place. NKF and the Centers for Disease Control and Prevention continue to push this preventative dialogue and at a joint briefing, they underscored the importance of early diagnosis and management of kidney disease.

Here are some of the little-known facts that were included in the congressional staff briefing:

The fact is, evidence-based strategies exist that can prevent millions of people from needing dialysis or a transplant in the future. In addition, these strategies will reduce the deaths, heart attacks, and strokes caused by kidney disease – ultimately delivering better outcomes for patients and lower costs to the healthcare system.   Through earlier detection and management of kidney disease, we can make sure patients with kidney failure never have to utter the words, “Why was I not told sooner?”

While Jon Aponte, a transplant recipient and NKF volunteer, was fortunate enough to never have to ask himself this question and is one of the few individuals who did receive an early diagnosis – he still experienced gaps in education and care. At the briefing on the Hill, Jon shared his emotional journey. He highlighted those gaps that may have helped him make lifestyle changes that could have prevented his need for dialysis, or allowed him to be more prepared for it. With a better understanding of kidney disease and his options, Jon may have been able to obtain a transplant sooner. 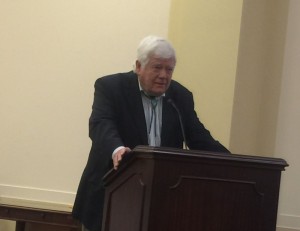 The Capitol Hill briefing was conducted in cooperation with the Congressional Kidney Caucus. Caucus co-chair, Representative Jim McDermott (D-WA), addressed the audience and talked about the Medicare End Stage Renal Disease (ESRD) program. We are pleased to have the support of the Congressional Kidney Caucus as we continue to push for policies that prioritize the early detection and prevention of kidney disease across the United States.

4 Responses to Congress, Kidney Disease and the Conversation that Needs to Happen