Kidney Action Committee is off to a Busy Start! (July Update)

The members of NKF’s Kidney Action Committee (KAC) were eager to roll up their sleeves and get going in their new roles. First up, our liaisons were asked to draft letters to the editors of their local papers to raise awareness about the need for increased research funding for kidney disease.  Our goal was to highlight the importance of investing in research and programs to improve early detection of kidney disease, slow progression and improve access to kidney transplantation.  This is a cost-effective strategy with the power to save lives, kidneys and money.

Important work is being done at the Centers for Disease Control and Prevention (CDC) and National Institute of Diabetes and Digestive and Kidney Diseases (NIDDK) to advance kidney disease research.  But federal funding for this research must be appropriated by Congress. Therefore, KAC liaisons included an important message in their letters asking representatives to expand federal research.

As a result of their efforts, letters from KAC liaisons were published in publications around the country, including Arizona, North Dakota, Georgia, Virginia, Colorado and Louisiana. The House and Senate Appropriations Committees have now completed their respective work on Fiscal Year 2016 funding for the Department of Health and Human Services (HHS), and NKF is pleased to report that our advocacy efforts have thus far seen some success.  For 2016, both congressional committees recommend $2.1 million for the CDC kidney program, identical to this year’s funding.  For NIDDK, the Senate recommends an increase of $76 million and the House an increase of almost $22 million, compared to the present funding level.  Further action on these bills is expected this fall, but we are off to a promising start!

Great job to everyone who participated in media outreach!

What’s next for the Kidney Action Committee?

In August, Members of Congress will report to their district offices for recess, and KAC patient liaisons will meet with their Members to promote early detection and management of kidney disease.  Early detection not only saves lives, but substantially reduces spending as kidney disease often goes undiagnosed or is diagnosed too late.

District meetings allow for more time with Members of Congress to discuss the issues important to their constituents.  They are a great time for constituents to talk about their personal connection to kidney disease and invite Members to attend or participate in local NKF events.

You don’t have to be a KAC member to schedule a meeting with your Members of Congress.  If you are interested, contact nkfadvocacy@kidney.org for scheduling tips and talking points. 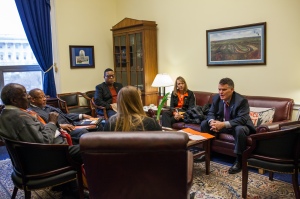 12 Responses to Kidney Action Committee is off to a Busy Start! (July Update)