Welcome back to the live blog for the 2015 Kidney Patient Summit in Washington D.C. Read all about Day 1 here and check back for regular updates!

The 2015 Kidney Patient Summit was a huge success! Scroll down to read the day’s activities (day one activities can be read here), and join our advocacy network to build the momentum around kidney issues. Check back tomorrow for a roundup of our advocates’ social media posts. And finally, here are the highlights from NKF’s government relations experts: 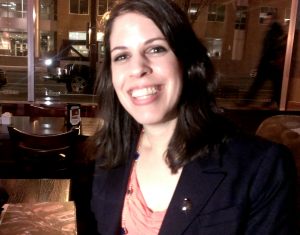 “My highlight was our very last meeting with Sen. Chuck Grassley of Iowa. He actually came in and spoke face-to-face with our advocates. Afterward, Grassley’s health policy advisor told the advocates how important their work was and encouraged them to keep talking about the issues they believed in. It meant so much to hear that our advocates were inspiring their representatives.
It’s important for everyone to know this is not a one-time thing. Everyone should follow-up with their representatives, let them know your issues and keep following up throughout the year. Join our advocacy network for more information on how you can advance kidney causes.”

“We had a few minutes with congresswomen Susan Brooks of Indiana’s 5th District. She spent about five minutes with us and asked informed questions about kidney disease. She also spoke with one of our young advocates about being a pediatric kidney patient. She seemed really interested in the issues. The Congresswoman is on a health committee with the House of Representatives, so there are exciting opportunities to work with her going forward.
The advocates were thrilled to connect with other people who share their same passion for the cause, and it was empowering to have them visit with their representatives and make their case on Capitol Hill.” 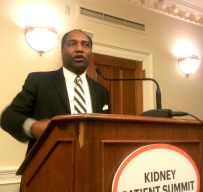 Dr. Griffin Rodgers, Director of the National Institute of Diabetes and Digestive and Kidney Diseases (NIDDK) is the keynote speaker at the Congressional Reception.

“We’re not only slowing the progress of kidney disease, but we’re looking at ways to reverse it, even with limited budgets,” he said. “If we don’t do it now, when are we going to do it? We’re making progress toward a cure, an eventual cure for this devastating disease.”

You can view his PowerPoint presentation about kidney disease in the United States and the work of the NIDDK by clicking this link.

After a long day of congressional meetings, the 2015 advocates are settling in for the 2015 Kidney Patient Summit Congressional Reception. Bruce Skyer, CEO of the National Kidney Foundation, kicked off the reception with a warm welcome to the advocates and government representatives in attendance.

Jummy Olabanji, an anchor at ABC7 in D.C., is the master of ceremonies. She found out she had a genetic kidney disease after going to the doctor for high blood pressure. She’s also doing something about it — she changed her diet and has started running to keep her kidney disease in check.

“My kidney disease it is genetic, but for so many Americans it can be prevented,” she said. “Collectively, we can all get something done to change to course of kidney disease.”

Kevin Longino, who chairs the National Kidney Foundation’s advocacy committee, has a family history of kidney disease. Even knowing this, he was living a life with “too much coffee, too much protein and 60-80 hours of work a week”.

“Basically, I was doing everything wrong. The doctor said with the path I was on, I would need a transplant within 6 months,” Longino said. “I changed my lifestyle and I was able to postpone the need for dialysis for four years. I am a big believer in awareness of kidney disease and I am impressed with all the other organizations here that are supporting research and awareness of kidney disease.”

Q and A with Drew Taylor of Indianapolis, Indiana 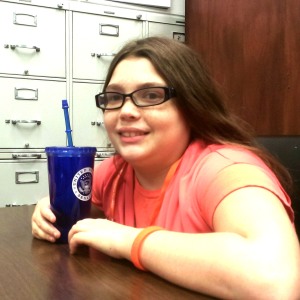 Q: Tell everyone a little about your story
Drew: “Im a kidney patient. I was diagnosed with Alport Syndrome at the age of 6. I was getting medication and feeling better, but I went into kidney failure. Now I’m 11, almost 12, and I am on PD dialysis.

Q: How is it being young and on dialysis?
Drew: It’s hard, but as long as you do what the doctors tell you you’ll be fine! I can’t swim in rivers, lakes or oceans, but I can do pretty much everything else.

Q: What are you advocating for?
Drew: Kidney disease is very important issue and it affects many people. We want more funding for kidney disease research. Many doctors don’t know about Alport Syndrome, there is a lot of research that needs to be done still.

Q: How is it participating in the 2015 Kidney Patient Summit?
Drew: It’s pretty fun! I’m here with the Alport Syndrome Foundation. We went around and got to talk with a bunch of different people and after lunch we got a tour of the Capitol! I think it’s really cool, because not only was I able to come here and see sites, but I am able to be heard by very important people who represent my state.

Nothing will keep Curtis Cotton, of New York, NY, from participating in the 2015 Kidney Patient Summit.

Curtis has been on in-center dialysis since his kidneys failed due to high blood pressure in 2001. Today he is supposed to be on dialysis, but he is missing his regular treatment schedule to participate in Capitol Hill meetings with his local representatives.

“I’m missing my treatment today,” he said. “I will be back on dialysis tomorrow, but to me this is important and we need to recognize and participate.”

The 2015 Kidney Patient Summit has exposed Curtis to a world of new ideas and people. He has met his first living kidney donor, and countless other who have different kidney diseases and causes.

“It’s been good to see some of the other faces of kidney disease,” he said. “Kidney patients need to be more active and find out what’s going on in the kidney community and how they can help. There’s no excuse for not getting involved!”

2pm – Colorado is for Kidney Advocates

This has been an eye-opening experience for Madison Ferner, 18 (in photo, top left, head of table). Madison has FSGS, she has undergone every type of dialysis and has received two kidney transplants.

“I am going to major in political science at Colorado University next year, so this has been amazing for me,” she said. “I’ve learned so much about other diseases and perspectives from patients too. I’m honored to be here on Capitol Hill making a difference for kidney patients.”

Suzanne donated a kidney to her sister JoAnn. They met with Katie Talento, Legislative Director  for Senator Thom Tillis of North Carolina. They discussed immunosuppressive medication coverage under Medicare.

“Katie agreed with us that 36-month coverage for immunosuppressant medications under Medicare was archaic, and didn’t make financial sense when you realize the cost of having to put someone back on dialysis if they lose their transplant” said Bill Ruff.

For JoAnn, it was an emotional moment asking for Senator Tillis’ support.

“I was crying with Katie, because I am so passionate about extending coverage of immunosuppressive drugs,” she said. “If I stopped taking these medications, I would undo what Suzanne did, and she saved my life. 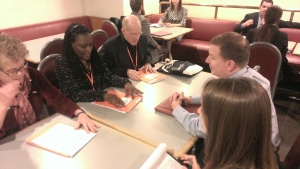 Alice Thurston, Washington, DC, AAKP, has post-strep glomerulonephritis and has had three transplants

Three advocates are speaking with John Eunice, General Counsel for Senator David Perdue of Georgia. They are presenting their case for their specific issues:

Alice is pushing the Living Organ Donor Protection Act. “I’m here because my brother, he has two five-year old twin boys, and he is subject to potential discrimination for long-term care and disability insurance because he was a living donor. I would like to see him protected.”

Walt Hunt, is pushing for an increase in basic research and trial work around kidney disease. His pitch is for an additional $2.1 billion for kidney disease studies through the National Institute of Diabetes and Digestive and Kidney Diseases (NIDDK). He would also like Senator Perdue to support Medicare coverage for transplant recipients, “That would provide medications under Medicare for kidney recipients to keep their organs.”

9am – 10-Year Kidney-versary on Capitol Hill! 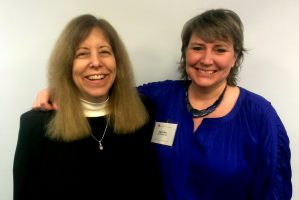 On March 2, 2005, Shar Carlyle received a kidney from Sally Reif. At the 2015 Kidney Patient Summit, they are celebrating the tenth anniversary of their transplant procedure.

The pair met in a way that was new and unusual ten years ago — online. Shar had originally posted her profile on the newly created website Matching Donors, which attracted Sally’s attention for a school project.

“I was doing a paper for school on internet ethics, and thought the topic of organ donation would be interesting to pursue. That’s how I found Shar,” she said. “Initially, I called to ask about the process and found out her father and brother had both died from PKD… I decided to get tested and was a match.”

At the time, finding donors over the internet was rare, and many hospitals had policies against performing transplants on people who had met online. Nevertheless, the pair proceeded with the transplant. Both are healthy and well today. You can read more about Shar’s journey in this Mercury News article, and you can read about Sally’s decision to be a living donor in this Summit Daily article.

Shar describes herself as a “crunchy liberal”, while Sally would do just about anything to “get a Republican vote”. They are a testament that kidney issues transcend political lines and are living proof that friendships are stronger than politics.

“It’s something we can come together on. We are united to help kidney patients and improve quality of care and access to medications,” Shar said.

Both have done their part to advance the kidney cause. Sally has helped convince others to be living donors, while Shar volunteers for the PKD Foundation and NKF. She also conducts an educational program about kidneys and organ donation in under-served communities.

8am – Coffee and Excitement 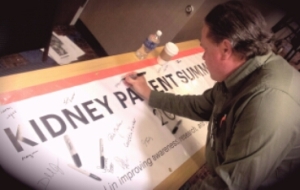 It’s going to be a big day on Capitol Hill. Advocates are getting ready, signing banners, finalizing meetings, and drinking plenty of coffee for the 12+ hour day ahead.