As a woman with polycystic kidneys who rarely ventures far from home and hearth, it takes a pretty big gust of wind to set me sailing.  NKF’s 2012 World Kidney Day provided the right motivation for taking on a such a physically challenging journey.  This was a rare opportunity to take part in our political process in support of a worthy cause, H.R. 2959 and S. 1454, bills that will give more kidney transplant recipients the life supporting immunosuppressant medication they need.   Despite everything we’ve been reading of late about how scandalous the parties have become, World Kidney Day was our chance, as citizens and kidney patients, to speak with powerful politicians and their trusted health aides and have a chance to be heard.

I loved representing kidney patients and their families in Washington D.C.!   Upon arrival at our hotel, I met NKF patient advocates from all over the nation.  The next day we joined up with the Dialysis Patient Citizens, aligning with their causes in unity.  That evening, at the Congressional tea, we heard moving testimonials from Congressman Jim McDermott D (WA), Congressman Silvestre Reyes D (TX), Congressman Larry Kissell D (NC),  Congressman Tom Marino R (PA), remarks were read from former Senator Bob Dole, there was an inspiring speech by Laverne Burton from American Kidney Fund, and a celebrity appearance by Lorenzo Alexander of the Washington Redskins (NFL). On World Kidney Day, March 8th, to my surprise and delight I was teamed with Troy Zimmerman, VP of Gov’t Relations for the National Kidney Foundation.  Together we went to two Senators, and four Congresspersons offices where we put our Soapbox training into action.  I was thrilled to learn that we gained one co‑sponsor of the bill within three days, and Senator Boxer quickly followed suit. While we still have hurdles in the Budget committees, I am confident that this bill will make sense to all, once they have learned more about it. The most memorable part was meeting people from all around the country, for a common purpose.  What I learned is that we all can come together, regardless of our political persuasion to do the right thing!   It was an honor and a privilege speaking on behalf of thousands of people who could not be there.  Thank you, NKF! 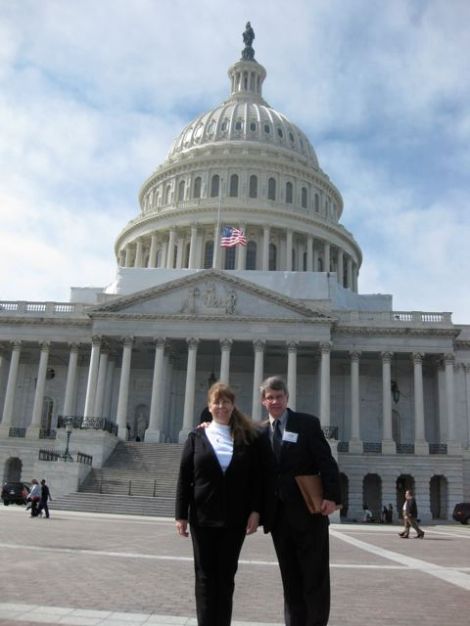 The National Kidney Foundation's advocacy movement is for all people affected by CKD, transplant candidates and recipients, living and potential donors, donor families and caregivers. We empower, educate and encourage you to get involved on issues relating to CKD, donation and transplantation.
View all posts by nkf _advocacy →
This entry was posted in personal story. Bookmark the permalink.